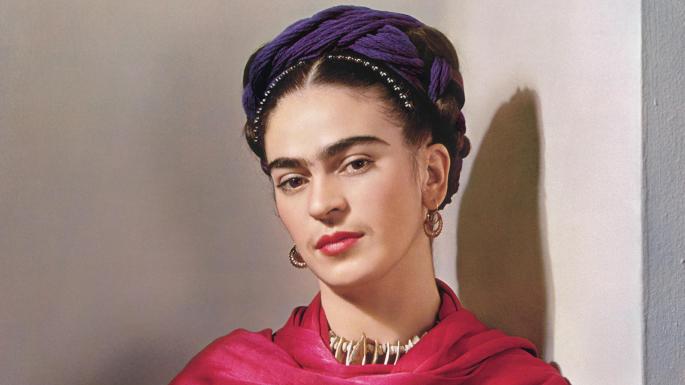 It was 112 years ago that Magdalena Carmen Frida Kahlo y Calderón was born in a small blue house in the neighborhood of Coyoacán in Mexico City. Her works immortalized her, and the planet came to know her simply as Frida, a Hispanic who went from being a Mexican to becoming the world’s heritage.

“Frida turned pain into art,” said Flora Peña, a former resident of the Mexican state of Veracruz who is now living in Tulsa. Her home in east Tulsa is a sort of museum honoring Kahlo. “This painting is enveloped in a jungle that may one day give me bananas; for now, I guess it will serve as food for the monkeys.”

Peña discovered the artistic legacy of Kahlo as a teenager. “I grew up in Mexico City and thanks to a visit to Coyoacán, I was able to learn not only about Frida’s work, but her history, the mark she left on Mexico and the world. She was a woman ahead of her time. Even today, her thoughts are very progressive.”

She has many books, paintings, posters and Kahlo keepsakes, but Peña says her collection grows smaller as her friendships grow. “I always ask my friends: Do you know who Frida was? No matter what they answer – yes or no – I give them something about this great artist so that they will remember her and so they will continue to promote her work.”

Venezuelan artist Elisa Abadí, who regularly dresses in the style of Kahlo but with a Caribbean touch, said via phone that Frida has been a major influence “because I lived in Coyoacán, next to her house.”

Abadí, whose art is influenced by German expressionism and is splashed with tropical colors and inspired by the turbulent social reality of Venezuela, said that “you cannot imagine the feelings there are in her house,” referring to the famous blue home. “It seems like she is giving you a tour of her space, her room, her kitchen, her studio, her paintings, her easel, her wheelchair. Everything is impressive.” She added: “For me, Frida in four words is: passion, strength, color, life.”

Lozada Angeles, a newcomer to Tulsa from Mexico, is a Frida fan. “I love her, especially because she was a woman who fought for things, and was very proud of her Mexican roots,” she said from her home in south Tulsa while showing a poster bearing many images of the painter’s face. “She is a real woman, no Photoshop. Flesh and bones. I am fascinated by her because she is real.”

Monica Bello, a Tulsa resident who is originally from Guatemala, said “Frida is an example for all women” because “she suffered, but was able to bear her pain with dignity. She fell in love, broke rules, and always, always, was proud of her people.”

Bello has a Kahlo-inspired doll covered with a white mantilla and bearing a crown of flowers. “She looks like a virgin, or better yet, an Indian woman about to marry,” she said. “I bought it for 20 pesos in Coyoacán, many years ago.”

Artist, feminist, dreamer, but above all talented, Frida Kahlo created a magnificent showcase for the world to notice and enjoy Latin American art.

Simply Frida: Born in Coyoacán, Mexico, on July 6, 1907. She died there on July 13, 1954. The last words she wrote in her diary were: “I await the exit happily and I hope to never return.” Her life was marked by physical suffering, pain and illness. The first of these misfortunes was when she contracted polio in 1913, which led to a series of ailments, injuries, accidents and operations. The first illness left permanent damage: a right leg that was much thinner than the left. In 1925 she was in a serious bus accident with injuries that affected her for the rest of her life. She married artist Diego Rivera in 1929. Ten years later she divorced him.

In 2007, coinciding with the centenary of her birth, Mexico’s Palace of Fine Arts displayed 354 of her works in an exhibit titled “Frida Kahlo 1907-2007. National Homage.” It was estimated that the exhibit attracted more than 415,000 visitors, a record number for any artist in that venue.

Kahlo’s life has been twice presented in movies. The first was “Frida, naturaleza viva,” with actress Ofelia Medina, and more recently, “Frida,” with Salma Hayek.